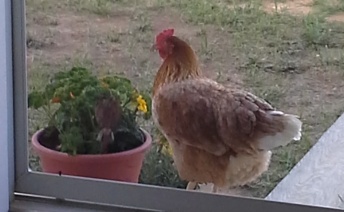 Penny is the sweetest little chicken. She follows me around the yard and meets me at the car when I come home from work. She found a dirt pile one day and it fast became her favorite place to be. She rolls around in it and works the dirt into her feathers. It doesn’t look appealing to me but it’s both cleansing and relaxing to her. I prefer a warm bath and candles myself, but to each chick her own I guess.

While outside one morning a storm worked its way toward us. I tried to get Penny to her coop but she wasn’t having it. She wouldn’t follow me and ran away when I tried to grab hold of her. The wind kicked up and rain began to fall. No matter what I tried she wanted nothing to do with leaving that pile of dirt. I went inside and asked God to protect my stubborn chicken. 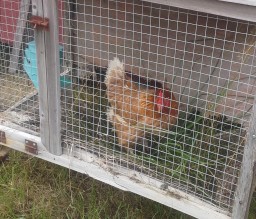 Once the rain subsided I found Penny holed up in the remnants of a rabbit hutch that some animal had torn apart. “Well, have you had enough?” She stared at me. “Come on, let’s go home.” Without hesitation she crawled out of the hutch and followed close behind me to her coop. I opened the door and she stepped in without a fuss. It’s amazing what a storm will do to bring a chicken to her senses. While that hutch provided a small measure of shelter from the wind and rain, it provided no safety at all from predators.

Not wanting to stay within the parameters God set for them and refusing to follow Him, the children of Israel chose to run away from God and live according to the dictates of the culture. He gave them instruction on how to live to ensure a peaceful and prosperous life and to protect them from danger but they wanted no part of it. They were taken captive by a cruel enemy, suffered great deprivation and lived in bondage. God did promise them a way out, “and they shall no longer be a prey for the nations, nor shall beasts of the land devour them; but they shall dwell safely, and no one shall make them afraid.” Ezekiel 34:28. It would be 70 years before they would be released but they would be ready to follow Him.

What is it about the dirt piles of this world, the lure of the forbidden that we find so appealing? We have a kind and faithful shepherd that offers green pastures and still waters yet we want dirt. He longs to gently lead us but it often takes a storm to get our attention. “But whoever listens to me will dwell safely, and will be secure, without fear of evil.” Proverbs 1:33. It’s amazing what a storm will do to bring us to our senses.

Have you found yourself drawn to someone or something that you knew wasn’t right for you, only to end up in disaster? Are you there right now, holed up in a place you were never meant to be? God has offered Himself as a place of refuge. “Deliver me, O Lord, from my enemies; In You I take shelter.” Psalm 143:9.

2 thoughts on “Rebel Chickens and Children”