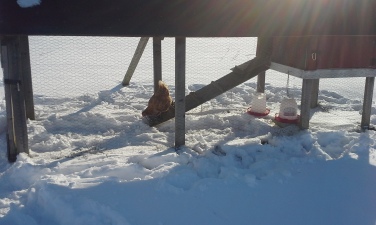 Strange tracks ran from the driveway straight to the chicken coop. I couldn’t recognize them from the house but got a better look when I opened Penny’s cage in the morning. The tracks encircled the entire coop and within them were paw prints. Claw marks were on the side of the coop and on the nest box. I’m not sure if the marks and prints were from a dog, a coyote or what but something had a hankering for a chicken dinner. “Better luck next time dog-breath, this coop is predator-proof!” I’m sure that’s what Penny was thinking. She was safely perched in her condo waiting for me to release her.

This was not the first time. Out in the country where we live, dogs roam freely sometimes and more than one has made its way to Penny’s coop. They bark and scratch and make Penny nervous but they can’t get to her. In fear, she flies squawking into her condo and is safe. Seeing the paw prints around the coop this morning, I was reminded of the account of Daniel in the lions’ den.

Conspired against by jealous princes, Daniel was forced to obey a temporary ordinance designed to trap him or to remain faithful to his God. Daniel knew the decree mandated that no one but the king could be worshipped for 30 days, yet he chose to pray to his God as he had always done. Daniel was caught. Displeased with himself for signing the decree that could not be altered, Darius had no choice but to command that Daniel be thrown into the den of lions.

So Close and Yet So Far

Daniel was facing the lions. Were they circling him and licking their chops? Were they roaring and swiping at him with their paws? As near to them as he was, Daniel was quite out of the lions’ reach. The king rose early the next morning, ran to the lions’ den and called for Daniel. Daniel responded, “My God sent His angel and shut the lions’ mouths, so that they have not  hurt me.” Daniel. 6:22. Though unseen to Daniel, God was as real to him as the lions that stood before him; and far more powerful.

We are all faced with troubles in this world. Sometimes the danger is very real and right before our eyes. Sometimes the enemy is unseen and working in ways we are unaware of. Many times the fear is of our own making. God has not left us unprotected and alone. He has provided a means of safety and rest if we will but trust Him. “God is our refuge and strength, a very present help in trouble.” Psalm 46:1.

Have you ever been so distressed and scared and felt you had nowhere to hide? Maybe you have forgotten all of the times God has provided for or protected you in the past. Whatever the lions may be for you, remember as Daniel did, you do have a place to run. “The name of the Lord is a strong tower; the righteous run to it and are safe.” Proverbs 18:10

Read more about Daniel in the lions’ den in Daniel, chapter 6.