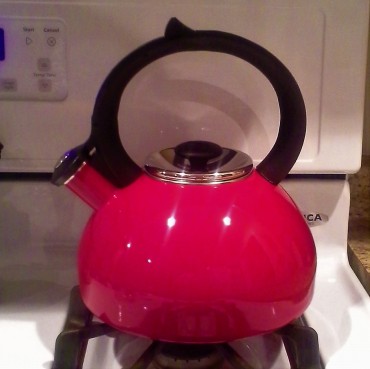 I like new things. If they’re shiny, that’s even better. If red, well, that ‘is’ my signature color. So you’d think a shiny, new red kettle would make me happy. I had the perfect kettle. It was a lovely ‘blue-red’. I forgot about it one morning and burned out the water, cracking the coating inside. It was ruined. I looked for something similar but the best I could find was this ‘orangey-red’ one.

I struggled with keeping the new kettle or holding out for ‘the perfect’ one. In frustration I set the new one on the stove. I was sad. Miserably, pathetically sad. Oddly enough, it looks quite nice in the kitchen. Why couldn’t I see it?

Holding On
It seems God’s people shared similar feelings, albeit on a much grander and less humiliating scale. After 70 years of Babylonian captivity, some of the Jews returned to Jerusalem to rebuild their lives, their city and their temple. Under the leadership of Zerubbabel, workers assembled to begin the temple’s rebuilding. Many praised God when the foundation was laid. However, some were not so happy. Ezra 3:12 But many of the priests and Levites and heads of the fathers’ houses, old men who had seen the first temple, wept with a loud voice when the foundation of this temple was laid before their eyes. Yet many shouted aloud for joy. Those that saw the glory of the original temple viewed the new one as nothing.

Letting Go
Why is it that things grip us so? Whether tea kettles, temples or something in between; pining for what we once had undermines contentment; leaving us bereft of joy and prohibiting us from enjoying life and moving on to greater things.

This happens in our spiritual lives as well. The apostle Paul was well educated and held a distinguished position as a Pharisee. Yet, to embrace all that God had for him, he had to release what he once held dear. Philippians 3:7-8 But what things were gain to me, these I have counted loss for Christ. Yet indeed I also count all things loss for the excellence of the knowledge of Christ Jesus my Lord, for whom I have suffered the loss of all things, and count them as rubbish, that I may gain Christ.

How About You
Is your heart set on former things; a position you once held, item you once had or relationship you once enjoyed? Are you struggling to find contentment with what is by mentally basking in the glory of what was? It’s a common struggle. Playing the dangerous game of comparison renders us casualties of mental-wars of our own making. Paul had the right perspective. He counted his losses as nothing in light of all he’d gain. Ready to move on to contentment? The answer is simple. You must first let go.